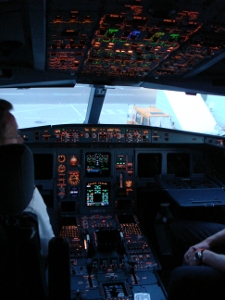 The Daily Mail reports that two British Airways pilots died within days each other, both citing in-flight toxic oil fumes as the cause of their ill-health.

Apparently it's common for pilots to don oxygen masks several times per week during flights due to poor air quality and there are no air quality monitoring systems on British Airways or other airline aircraft.

Before his death, BA Pilot Richard Westgate instructed his lawyers to sue BA for alleged health and safety breaches.

British Airways may be liable under the health regulations because they fail to monitor the on-board air quality.

There is no mention of whether passengers are also at risk.

For the full story see: https://www.dailymail.co.uk/news/article-2269059/BA-pilots-Richard-Westgate-Karen-Lysakowska-killed-breathing-toxic-oil-fumes-mid-flight-pictured.html

I was traveling with my wife and 7 month old daughter, while I was helping my wife make my daughter comfortable I requested for a glass of warm water, the stewardess who was busy chatting up another passenger on what sushi she likes, asked me to get ...
Allen
Read more
Add new
I've flown BA for many years but this year that has changed. Along with Flybe, they are the worst airline I've ever used. This year started with a family holiday to Tampa, from Jersey (via Gatwick). Our flight from Jersey to Gatwick was scheduled ...
TR
Read more
Add new
So it's March 29th, the day after Storm Katie and Flight 778 from LHR to Stockholm is delayed for over three hours.  It's not because of the storm (all the other flights from here are going on time) - it's because there is no crew to fly ...
Geoff
Read more
Add new
I've traveled with my family in (paid) Business Class a handful of times. For an upcoming trip I booked us in Premium Economy for the return trip-but paid an additional $2,000 to get upgradable fares. They never told me that between the online ...
David
Read more
Add new
Our holiday of a lifetime from Australia to the UK in 2007 was spoiled by abysmal British Airways "customer service". We booked through Qantas and didn't really want to fly BA but they operate a code share service where we flew Qantas to Singapore ...
Neil Robertson
Read more
Add new
My story can be listened on: http://www.youtube.com/watch?v=tVxP0ZCQK1w Also embedded here for convenience: {youtube}tVxP0ZCQK1w{/youtube}
Jorma Heikkila
Read more
Add new
I would like to share an interesting experience. On Feb 1, 2014 we have booked our flight to Miami.   On Feb 16th, 2014 we have paid to select seats on the plane London-Miami-London. We had the pre-selected seats on the way to Miami but BA failed ...
Eric Hubert
Read more
Add new
My friend Doug and I flew from Orlando to London, via Miami. We arrived in London to find that our golf clubs and suitcases had not made the trip with us. The Customer Service agent at Heathrow told us that the bags were in Miami. She gave us a ...
Jeff Elledge
Read more
Add new
My baggage is missing because I was given the wrong baggage tag by one of the BA staff at the check in, which makes the tracing of my baggage so difficult. Even worse is their customer service, I have been phoning them in overseas phone rates. ...
Ying Zou
Read more
Add new
Me and my family were going to Dallas from Helsinki on March 2013. We had bought tickets via net. We needed to change flight at Heathrow, London. Both flights were operated by BA and they were sold us as a packet. We were first timers, but we ...
Jorma Heikkilä
Read more
Add new