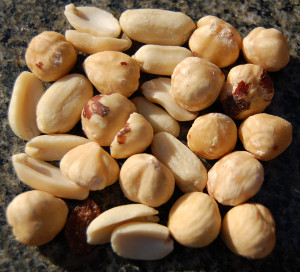 British airways has reached a new low in their lack of customer care by failing to look after a young passenger with a life threatening nut allergy.

Mollie Hyams, who was 5 years old at the time of the incident, and her family were bullied into leaving the plane after a request was made not to serve nuts on the flight due to Mollie's allergy.

There was a similar situation handled very differently on a recent Ryanair flight. Ryanair were notified of 4 year old Fae Platten's nut allergy, made several announcements to passengers and ensured that no nuts were sold on the particular flight. Despite the warnings, a passenger four rows away failed to comply and Fae suffered an attack after breathing the contaminated air. Her face became swolen, she lost consciousness and needed hospital treatment once the flight landed. The passenger has been banned from flying with Ryanair for two years.

See the Daily Mail and the Telegraph websites for more information.

By all rights, I should LOVE Brtiish Airways. I fly BA several times a year round trip, from IAD to TLS, via LHR. The reservation system is satisfactory.  The scheduling fits my needs to a 'T'.  The planes are as comfortable as I can ...
LDD
Read more
Add new
I flew BA from Atlanta to Heathrow with my 11 year old daughter. We had to sit in different areas - no attempt by BA to sit us even remotely near each other. OK seating is sometimes difficult.The real issue is that BA cabin staff were sweetness ...
John Weir
Read more
Add new
Regarding a flight from PHL to London, Heathrow. We packed our bags and got to the airport. When we arrived at the gate we realized that the plane was delayed due to what we were told was "wind going against the path of the plane". The plane was ...
Anonymous
Read more
Add new
Took BA16 from Singapore to London Healthrow, I have this habit of thanking the crew if they were not busy and standing along the aisle.Said thank you and good bye to 2 crew on the way out but at the door, i noticed two white stewards who were ...
Asian Passenger
Read more
Add new
This is with a heavy heart that I write this letter to you this morning. I received a call from my mother in SA this morning to advise me that my father passed away at 6am this morning. No I am fully aware that this is not your problem, but this is ...
Dawid Louw
Read more
Add new
I booked Business seats for my wife and me on British Airways via the Destinia travel agent from Cairo to London Heathrow and return from London to Cairo (BA154 & BA155). I booked the flights online two months before the traveling date. I have ...
EMAD AWAD
Read more
Add new
On June 3rd at about 6:30am, I got to Heathrow to catch my flight to Italy. I only had my carry on bag as my main luggage went from Toronto all the way to Italy so I had no bags to check. I went to a BA rep to get my passport checked and whatnot. He ...
Nicole
Read more
Add new
So this week (17 March 2013) my wife flies on American to London and then on to Moscow on BA 233.  She gets there fine.  Two days later I happen to look at her American Airlines account (like me, she's Top Tier) and see that her return flight on ...
Phil C
Read more
Add new
Yesterday I took a flight from Dublin to Heathrow, which got delayed by an hour, which I was told is typical for that particular flight route. This in itself was not a real problem, but what happened on arrival was entirely avoidable. Apparently as ...
Remy
Read more
Add new
After multiple very painful calls to booking to deal with bored and annoyed customer service people, we got five tickets from Washington D.C. to Geneva for a family vacation, using miles and two vouchers. The total price of our "free" tickets: ...
Robert Saxton
Read more
Add new