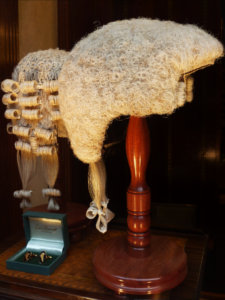 Even a High Court Judge can't get a straight answer from British Airways about lost luggage.

Judge Peter Smith was apparently so irate about his own lost luggage, he threatened to order British Airways’s Chief Executive to the court to explain why a whole plane load of luggage could go missing.

The BA legal team didn't think it was appropriate for the Judge to be raising a personal grievance while presiding over an unrelated £3billion case and Judge Smith was removed from the case.

You can read more about this story on the Daily Mail and Telegraph websites.

This is the Judge I'd wan't presiding over any legal battle with BA!

After the July 2014 fiasco where BA lost the luggage of 1000 passengers, BA has managed to fail yet again. I took flight BA099 from T5 London to Toronto 16 December 2015 with some 200 passengers. Upon arrival in Toronto and after watching an empty ...
Livid in Toronto
Read more
Add new
I have heard horror stories but never knew it will be my turn soon. On my Trip back to London from Accra, Ghana, when I got to my seat, water was dripping on my seat. When I asked to be re-seated, I was told the plane was full and I had no option ...
William Nortey
Read more
Add new
I would like to share an interesting experience. On Feb 1, 2014 we have booked our flight to Miami.   On Feb 16th, 2014 we have paid to select seats on the plane London-Miami-London. We had the pre-selected seats on the way to Miami but BA failed ...
Eric Hubert
Read more
Add new
I flew from London to Bangkok for 11 hours in economy. Torture! The plane they used was obviously very old - my mobile has a screen about the same size as their tv screen. No outlets to charge our devices. No legroom whatsoever - serious leg ...
Annie F
Read more
Add new
A terrible airline that treats customers like units, takes greed and rudeness to another level, and their so called customer relations managers are an utter disgrace, to think they are Britains flagship carrier is a very sad indictment as to how ...
simon holmes
Read more
Add new
To this airline, all passengers are a major inconvenience, between, them taking your payment and dumping you off at your destination.Such is the arrogance of the airline, you must demonstrate to them, that it is a privilage for YOU to fly with ...
ISB
Read more
Add new
Just booked flights with BA - first of all website journey was shocking (actually Easy Jets is much much better) and it kept booting me out half way through and it took 5 attempts to book long haul from Glasgow to Vegas. When it finally let me book ...
Khogg
Read more
Add new
BA were once a pleasure to fly with, now I find it despicable, not only their contempt for customers, but also from what I read how they pay cabin staff. My latest experience was a dreadful flight to New York on 4th December, whereby having paid ...
Neil Cox
Read more
Add new
I've traveled with my family in (paid) Business Class a handful of times. For an upcoming trip I booked us in Premium Economy for the return trip-but paid an additional $2,000 to get upgradable fares. They never told me that between the online ...
David
Read more
Add new
British Air is terrible. just last week , they lose my Mac Laptop... and when I tried to talk to customer service in terminal 5, the jerk working there try to have security take me away instead of dealing and helping with my situation. NEVER ...
David
Read more
Add new

ba__sucks RT @atanascu: Hello @British_Airways. We are still waiting for the future travel vouchers refunds even after two years. How much longer are…
Jun 26 • reply • retweet • favorite