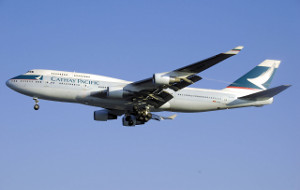 Guess which airline didn't make it into the top 10 in the recent "World Airline Awards" according to a recent Daily Mail Australia article.

Award winners are decided by travellers from over 160 countries who take part each year in the world’s largest airline passenger satisfaction survey.

Cathay Pacific was awarded first place this year with Qatar Airways in second place and Singapore Airlines in third place.

The complete list of the top 10 best airlines in the world are:

I was flying with them to get to Madrid, and had to spend the night in madrid to catch a flight to Athens, the plane had engine trouble and they could not get me to Madrid on time the next morning to catch my connection. I told them that at the ...
Daniel Le
Read more
Add new
My husband and I were Downgraded on a British Airways Flight from Houston to Moscow from Clubworld to Economy on 15th September, 2013 were not compensated, made several reports online on their website got only a case number but no other response. ...
Joy Godfrey
Read more
Add new
Bumped in Florence with the family and left to book a flight home ourselves. From an airport 100km to an airport 80km away from where we started. Customer Relations knowingly offer derisory BA vouchers and break their own EU guidelines around ...
Sheppy
Read more
Add new
So on June 18th I had a flight from Newcastle International Airport to Heathrow, then onwards to Philadelphia. The Philadelphia flight was supposed to depart Heathrow at 17:20pm. At about 16:30pm I was informed that I needed to contact the airline, ...
Adam
Read more
Add new
Tried prebooking seat for my wife going back to Thailand. Web site wouldn't let me. Phoned BA. Indian lady less than helpful. Despite me paying for a Premium Economy seat she would only speak to my wife. She speaks less English than the rep. It was ...
Glenn Michael Perry
Read more
Add new
Why on earth if BA but it's same horrible biz class seats on its new A380s? Isle seats have zero privacy and if you are in a window seat, you have to crawl over another passenger. And still no Wi-Fi on many A380s. Shameful! I will never fly BA again ...
BA hater
Read more
Add new
British Airways air hostess seems to be the worst especially from Bangalore to London ...absolutely unfriendly without helping old people to keep their luggage on the top. They only worry about their make up and hair style that is it. They are end ...
engai
Read more
Add new
We saved supermarket points for 1 1/2 years, so that we could convert them into air miles, hence pay for our flights to go and get married in the British Virgin islands. We finally saved enough miles to book our tickets. Little did we know the ...
Khi
Read more
Add new
After years of being a loyal customer of BA and accruing over 500k (now) Avios points over the years AND 2 voucher companions in the last 18 months, I decided its about time I made the most of these 'rewards'. Having been looking for reward flights ...
RedScopeAlpha
Read more
Add new
On my initial departure date, I experienced 2 cancellations including being sent from one airport to another only to find out that the flight was also cancelled. They booked me on another flight the next day and when I called them the next morning ...
Arya
Read more
Add new